The Sackler Crossing is a bridge across the Lake at the Royal Botanic Gardens, Kew. The bridge is a beautiful piece of architecture & engineering. As part of the third year module LD3002 Fielding we have to write a Management Plan for a chosen site at either Kew Gardens or Richmond Park. The lake & Sackler Crossing is my chosen site, due to its variety of habitats & interesting features. The following text has been taken from my management plan: Royal Botanic Gardens, Kew | The Lake & Sackler Crossing | Management Plan, by Alice Hankin 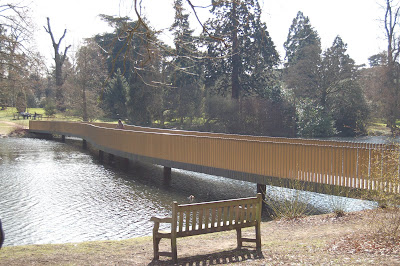 "The Sackler Crossing was installed in 2006 & was the first ever bridge to cross the lake. The name is in honour of Theresa Sackler & Dr Mortimer, two philanthropists, whose donations made it possible for the bridge to be constructed. The designer was John Pawson, a British Architect. The bridge was designed in such a way that it reflects the precedent set by William Kent, an early visionary of Kew's, who wanted features in the landscape to be "stumbled upon" without prior planning. 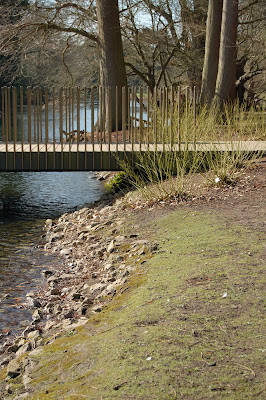 The exact location of the bridge is purposeful; it forms part of the arc that Wilkinson Eyre planned in his master plan for the Gardens. The arc's central point is the Palm House, & then it sweeps around, cornered by through-views, & bisected by the Syon vista. The curve creates a new circulation route through this section of the Gardens, & the Sackler Crossing allows users to cross the water at this point. 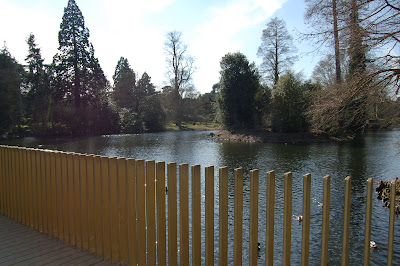 The use of black granite & bronze to construct the bridge "reinforces the elemental character of the esign" (John Pawson -Lake Crossing). The granite lies in bands forming the deck walkway, & cast bronze has been used in vertical cantilevers to create simple balusters. If you view the bridge from either end the balusters seem to be a solid barrier, however from a side angle it is realised that there are hundreds of individual bronze bars, allowing views through to the surrounding water 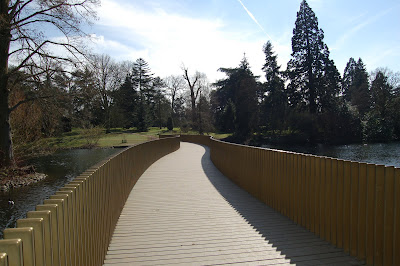 The bridge has created a new route & enabled far easier access to certain areas either side of the lake, which before were neglected." 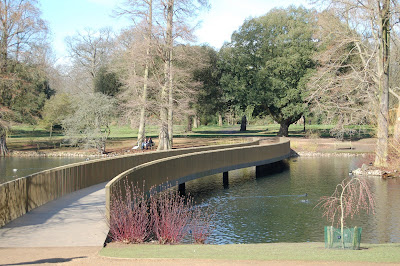 
This blog is an on going way for me to record & share my inspirations, likes & dislikes with other landscape architects, or anyone that finds the subject of Landscape Architecture, & design as a whole, interesting. The blog contains a variety of design aspects, from Landscape Architecture to Architecture, grafitti design to model making, photography to sustainability. The tabs below give a list of topics that are contained within the blog, focus weeks being a self-directed week away from university to explore & discover new inspirations or to follow up on already held ones.